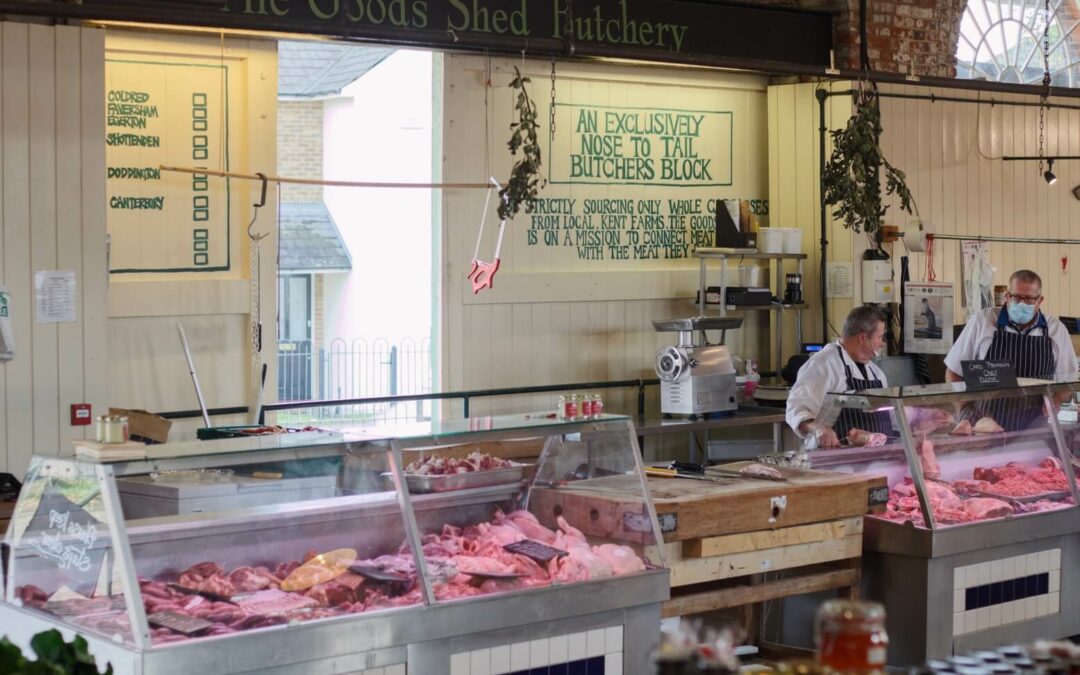 At The Goods Shed, Canterbury,  we strictly source whole carcasses from local, high welfare farmers only. Our butchery is on a mission to connect our customers with the meat they eat, encouraging them to eat better meat and to understand and enjoy every part of the animal. Our butchers are skilled, passionate and hugely knowledgeable. This article gives an overview of why local and why whole carcasses, as well as more detail about what we have on offer and how they animals are raised.

Why is the whole carcass and local-only important?

The Goods Shed beef comes from Duncan Anderson’s herds, near Doddington. The cows have plenty of space to roam, overlooking the Swale, feeding on a grass-rich diet. Our prices are as good at the supermarket, with mince at £8.50 / kg, with extra value in the welfare credentials (and, consequently, the flavour), the service and not a piece of plastic in sight.

Our sausages are made from David and Julie Murray’s Snoad Farm Pigs (a rare Oxford and Sandy Black breed) with no fillers: just meat, seasoning and herbs. The only caveat? They must be eaten within 48 hours, though we’re confident that’s not a difficult task (and they can be frozen if not).

As a result of using the whole animal, we have plenty of offal – which is nutrient-dense, cheap, flavoursome, and revives the thrifty, rural tradition of cooking with lesser known parts. Not sure how? Ask your elders or our butchery team, or stay tuned to our blog for recipes.

In the UK, the deer is a thriving animal in our wild, which makes venison one of the most sustainable meat-eating options. Shot by local hunters in small numbers, The Goods Shed often only has a beast at a time, breaking it down into a broad offering of haunch, steaks, mince sausage and burgers, and replenishing when a fresh supply is needed. Similarly, during game season, our counters are fit to burst with wild pigeons, whose numbers must also be carefully managed to maintain a healthy balance in our woodlands.

Kentish Rosy Veal Veal does not have to be a cruel meat. The Goods Shed high-welfare veal is a new supply – from dairy farmer Phil Scutt at Badlesmere Court Farm, just 12 miles away – and some of the first veal we’ve seen in Kent in a very, very long time. Instead of being shot at birth (the fate of most male calves born into a dairy herd) these calves are reared in groups and fed an appropriately nutritious diet. They have plenty of space to roam, and good deep bedding to lie down on. Their digestive systems and muscles develop properly and that means that the flesh is not pallid white but a rosy pink.Tender and delicious, we should eat more of it – it’s as good and  responsible as any of the other meat on our block.

Considering The Real Cost of Chicken

It is a concern that, at the last check, supermarket chicken was being sold for as little as £2.83 for the whole bird. When you also consider that the breast is the most sought after part, meaning that demand is high (and that much of the bird goes to waste purely to meet said demand) you can begin to understand just how little the chicken is valued. At the Goods Shed, we offer the whole bird, and only break down the meat from the supply that we have, selling also the hearts, the livers, sometimes the feet and the necks, and the carcass, to ensure we hold these birds in the highest of esteem. Consider the extra pounds you may spend on our chicken as an investment in better, kinder meat, or eat less of it and explore our other options at a lesser cost.

Dexter Beef, from one of Kent’s Longest Female Farmers

There’s always excitement when Di Smith’s Dexter beef from Alkham Valley is on our counter. She’s renowned for her ‘Moomin’ cattle, as acknowledged by the Dexter Cattle Society (of which she was once also president) and she has been farming for over thirty years. The Dexter is Britain’s smallest native breed of cow but comes with big flavour, bright colour and beautiful fat marbling. Her Dexter grazes freely on herb-rich pastures, supplemented occasionally by hay, sugar beet and, when they’re lucky, the odd French baguette. Fed in this way, each animal develops excellent fat that is rich in omega 3. Each animal is carefully and slowly raised until they are mature which is somewhere between 24 – 48 months. Intensively farmed animals are slaughtered at 10 months and over fed with barley to add fat and trans fat, so you can really see how and why Di’s Dexter are so highly regarded: not only for her welfare standards, but for the incredible flavour it results in.

The Case for Smaller, Local Abattoirs

Most problems in welfare arise in the distance livestock must travel to slaughter where there isn’t a local option (loading, unloading) and there is a substantial benefit of small abattoirs in assisting with emergency slaughter for injured livestock.

Needs can’t always be met by small abattoirs and vice versa in larger ones, so it is crucial that there is a choice to enable a strong functional and sustainable market in the U.K

The critical role small abattoirs can play in providing ‘private kill’ is the easy return of the entire livestock product to farmers, suppliers and markets. This adds value to those products and less waste (offal, for example, is returned rather than thrown away) and should be recognised as key to enable the evolution of a self-sustainable, rural farming economy.

Mobile abattoirs are becoming a solution in areas that don’t already have a localised structure, though we’re fortunate in East Kent to still have the wonderful Doughty’s and Leo Brockman, whom we support wholeheartedly.